The Reliable Data Protocol (RDP) is designed to provide a reliable data transport service for packet-based applications such as remote loading and debugging. The protocol is intended to be simple to implement but still be efficient in environments where there may be long transmission delays and loss or non-sequential delivery of message segments.

Although this protocol was designed for applications such as remote loading and debugging in mind, it may be suitable for other applications that require reliable message services, such as computer mail, file transfer, transaction processing, etc.

RDP is a transport protocol designed to efficiently support the bulk transfer of data for such host monitoring and control applications as loading/dumping and remote debugging. It attempts to provide only those services necessary, in order to be efficient in operation and small in size. Before designing the protocol, it was necessary to consider what minimum set of transport functions would satisfy the requirements of the intended applications.

The list of requirements for such a transport protocol:

In order to combine the requirements for bulk transfers of data and reliable delivery, it is necessary to design a connection-oriented protocol using a three-way handshake to synchronize sequence numbers. The protocol seems to be approaching TCP in complexity, so why was TCP not, in fact, chosen? The answer is that TCP has some disadvantages for these applications. In particular:

RDP supports a much simpler set of functions than TCP. The flow control, buffering, and connection management schemes of RDP are considerably simpler and less complex. The goal is a protocol that can be easily and efficiently implemented and that will serve a range of applications.

RDP functions can also be subset to further reduce the size of a particular implementation. For example, a target processor requiring down-loading from another host might implement an RDP module supporting only the passive Open function and a single connection. The module might also choose not to implement out-of-sequence acknowledgments.

Relation to Other Protocols

RDP is a transport protocol that fits into the layered internet protocol environment. Figure 1 illustrates the place of RDP in the protocol hierarchy: 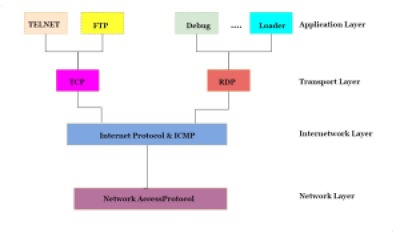 RDP provides the application layer with a reliable message transport service. The interface between users and RDP transfers data in units of messages. When implemented in the internet environment, RDP is layered on the Internet Protocol (IP), which provides an unreliable datagram service to RDP. Data is passed across the RDP/IP interface in the form of segments. RDP uses the standard IP interface primitives to send and receive RDP segments as IP datagrams. At the internet level, IP exchanges datagrams with the network layer. An internet packet may contain an entire datagram or a fragment of a datagram.

Protocol Service Objectives
The RDP protocol has the following goals:

Data flows through an RDP connection in the form of segments. Each user message submitted with a Send request is packaged for transport as a single RDP segment. Each RDP segment is packaged as an RDP header and one or more octets of data. RDP will not attempt to fragment a large user message into smaller segments and re-assemble the message on the receiving end. This differs from a byte-stream protocol such as TCP which supports the transfer of an indeterminate length stream of data between ports, buffering data until it is requested by the receiver.

The receiving end of each connection specifies the maximum segment size it will accept. Any attempt by the sender to transmit a larger segment is an error. If RDP determines that a buffer submitted with a Send request exceeds the maximum size segment permitted on the connection, RDP will return an error to the user. In addition, RDP will abort a connection with an RST segment if an incoming segment contains more data than the maximum acceptable segment size. No attempt will be made to recover from or otherwise overcome this error condition.

RDP implements a reliable message service through a number of mechanisms. These include the insertion of sequence numbers and checksums into segments, the positive acknowledgment of segment receipt, and timeout and retransmission of missing segments.

The values specified for these parameters should be based on the amount and size of buffers that the RDP is willing to allocate to a connection. The particular RDP implementation can set the parameters to values that are optimal for its buffering scheme. Once these parameters are set they remain unchanged throughout the life of the connection.

The flow control and window management parameters are used as follows. The RDP module in the transmitting host sends segments until it reaches the connection’s segment limit specified by the receiving process. Once this limit is reached, the transmitting RDP module may only send a new segment for each acknowledged segment.

This is affiliate marketing website. For avail Cashback it needs to send email of purchased product(s) along with invoice received from Merchant.

Valid transaction will be eligible for cashback. Cashback is only valid for purchase from given link for cashback.
Our email id: contact@sanmati4.com